Vision New Media is the largest media group of its kind in the
ASEAN region, having built a comprehensive and integrated group
that spans the entire content creation and distribution spectrum.

Great works of art deserve to be spread and shared.

Got a good story? We’ll take it all the way to the big screen.

Lines and shapes full of life and heart? Yes, we can do that.

PEEK IN TO OUR SCREENING ROOM 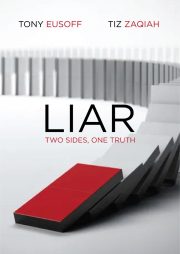 Lara Sulaiman, a smart and dedicated teacher who has recently divorced from her husband, agrees to go on a date with widowed surgeon, Aiman Yusuf. But afterwards, they each have a very different story to tell – Lara accuses Aiman of rape, while Aiman maintains that he helped an unwell Lara get home safely. Who is telling the truth?

As the fallout from the night spirals out of control, Liar explores the devastating cost of deceit, on both the couple and their friends and family, as secrets and lies are laid bare.

International Crime Division (ICD) officers Heriyanto Salim and Serena Too investigate serial murders that take place across Malaysia and Indonesia. Touted as ‘The Family Man’. The killer has a distinct M.O. - he brutally kills his victims loved ones before stabbing his main target through the back of the head. All avenues of investigation lean to industrialist/kingpin Datuk Ishak Hassan, his reckless son Zeckri Hassan and their unlikely ally, former ICD officer Megat Jamil.

The Kopitiam once owned by Marie now belongs to a prematurely jaded Steven. Just as he plans to sell off the unloved business, a couple of Kopitiam regulars offer to take it over; recently retrenched dreamer - Alia, and her spacey but well-intentioned bestie - Seleb. Together with a cute-but-awkward chef - Tim, a know-it-all helper - Baboo who refuses to be fired and the world's most improbable Hollywood star - Jo. The gang embark on all manner of (mis)adventures in their bid to bring the long-forgotten Kopitiam into the 21st century.

A dead body is found on the Tuas Bridge right on the border between Malaysia and Singapore. Officer Megat from Malaysia ICD and Officer Serena from Singapore ICD must work together to solve this murder mystery that involves both their countries. What at first looks like one murder, turns out to be two...

VIEW ALL PARTNERS
JOIN THE TEAM